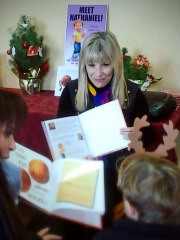 BETH EL moved from the concrete jungle of Manhattan, New York City to the peaceful red rocks of Sedona, Arizona. She now resides in the Lonestar State. Texas! Y'all !
Beth El is a professional singer, songwriter, worship leader, story teller, screenwriter and voice-over artist.  One of her greatest passions is writing and story telling for children.  She is a voting member for the Grammy’s for 12 years, and won an Emmy with the McDonald’s Choir. Beth El had the honor of doing one of her many albums at RCA/BMG Records.  Her recent voice-over was for a movie called God’s Not Dead..
While attending college, she wrote about a boy jumping into a bowl of alphabet soup.  Dancing on a carrot, suntanning on a cracker, and becoming the ultimate hero when he binds up the evil letter “D”, he makes it to the top of the wave.  Nothing can stop Him!
This was how The Adventures of Nathaniel began.  Nathaniel was born out of this new beginning of courage, bravery, and inquisitiveness.  There are currently seven Nathaniel adventures in process, and many more to come.
Beth El had a dog named Caleb, which means “dog”.  (She named her dog “Dog.”)  They would play soccer.  Caleb would literally kick the ball to her.  They were best friends. Beth El loves to laugh , and it gives her great joy when people love and help one another. 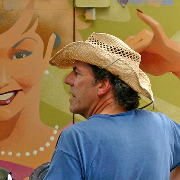 GET READY FOR THE NEXT ADVENTURE

There are seven manuscripts that are now done. Next step for Nathaniel will be inside a hard cover book with a bonus song. The series will be out !

to order and I will send you an invoice.

***Please include the name of little people for autographed copy!